Another way to illustrate our work with Pong would be with Lego Digital Designer.
Here is what you can get with very little effort:

This was made with Lego Digital Designer 4.3 that you can get for free here.

I have used the Extended bricks library (The ones that are red), in order to be able to select the black color later on (for the larger plates).
The game is surrounded by an orange layer the same way that I did previously with Blender(You can check this out here).
Notice that I have chosen flat tiles for the pads, the ball and the orange rectangle.
By the way, this model cannot actually be built because nothing comes to stick the large black plates together. The purpose was only to make a png image out of it.

Just for you to know, I have just walked for 4 hours this afternoon, 20 kilometres in the cold rain, makes me feel good!

Next challenge, 10 hours, 50 kilometres. I will keep you posted.

I am so exited about my new project that is to set up a proper education system within Code.Org !

My goal is to setup a program including several tutorials that the students can try while I evaluate them.

For those who are not aware of the Hour of Code and the other activities available at code.org, I invite you to check it out! Basically, code.org is a website dedicated to programming skills, for people aged between 4 and 104 y.o.

Contributors are famous actors of the IT, Media, Sports, Fashion industries in the U.S. (Bill Gates, Mark Zuckerberg, Chris Bosh, Karlie Kloss, Will.I.Am… among others)

As a teacher, I can create sections, students, activities, and monitor, evaluate and encourage the progression of my students.

I can’t wait to try this out this coming week.

Stay tuned, that’s all for now.

GOAL:
The goal of this challenge #004 is to solve the Rubik’s Cube (www.rubiks.com) in less than 60 Seconds. 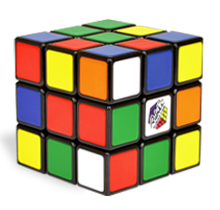 DESCRIPTION:
The Rubik’s Cube is one of the most famous puzzles since its creation in 1974. It was invented by Hungarian Sculptor Ernő Rubik. It is a cube made of 26 smaller cubes, 9 on each face, the central one is replaced by a patented rotating mechanism. The world record is set to less than 6 seconds,(Under 4 seconds by the CS3 robot), but according to most specialists, it can be solved in under a minute, after learning a basic routine and some practice. Another reason why I have set this challenge time to under a minute, is because the American actor Will Smith has managed to solve it in 55 seconds at a french TV show few years ago.

ACHIEVEMENT EXPECTED:
In order to succeed, you will have to purchase a 3×3 rubik’s Cube that can be found at your local toys reseller, or online at http://www.rubiks.com for 15£ or so. You can also find plenty second hand for cheaper, borrow it from a friend, or even start practicing with online apps. You will probably need to learn one of the many methods/algorithms available, and practice for a few weeks before you get there. 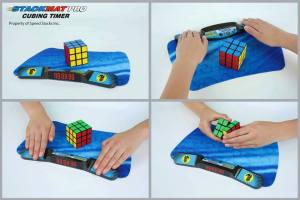 Theoretically, you would have to use a proper Speedsolving timer, in order to get accurate time. But if you don’t consider to break a world record, a simple timer will be fine. Once you are ready for the record, get the help from a friend or two for the timer and video recording (A smartphone would be fine for this). Once you have published that video online, you can consider it a success and choose another LethargicDog 256 Geek Challenge.

Have fun, and good luck !
Pascal

GOAL:
The goal of this challenge #003 is to use Trimble Sketchup (Used to be Google Sketchup) at www.sketchup.com for designing a Skate Park.

DESCRIPTION:
There’s not much to be said about the skate park itself. Everybody knows what it is. But it has to be made of at least three modules, two at both ends and one in the middle. I expect some street art on each face, based on photos or anything else.
Regarding Sketchup itself, make sure you download the free version (Make), unless you have other projects that require advanced features.

ACHIEVEMENT EXPECTED:
In order to succeed, you have to use the Sketchup App, available at http://www.sketchup.com.
After the Skate Park is finished, you will have to export it into a 2D picture (PNG format), so then you can publish it on any of your favorite social networks.
Should you need any help for getting started, you will find many templates and members achievements on the Sketchup site (check the “Learn” Menu). Hundreds of YouTube tutorials are also available.

If you can get close enough to the picture on my sample above or even better, or if you prefer to user your favorite 3D design app instead, you can consider it a success and choose another LethargicDog 256 Geek Challenge.
Have fun, and good luck !
Pascal